Setting up the solar array

Watermaker school
I am sitting in my hut at Palm Project contemplating the completion of our project, the Uluveu RO Desalination Plant, local name Uluveu Nuwai Pavilion.

All volunteers have left now and I am just finishing off before I also return to New Zealand. It is all and more than we expected, firstly the building to house the RO Desalination Plant was built by Martin Peet of Australia and 10 local men from Uluveu island. This group of builders have worked with NZCHET for five years now, they are graduates of the Uluveu RTC (Rural Training College).

The building is a two roomed structure, on one side we have three showers and four wash basins and in the other side all the equipment for making water. The water maker was designed by Terry Forsbrey of Open Ocean NZ also included in the equipment are twelve Raylite batteries plus the component boxes. The system has been designed by Jason Whaanga. All plumbing has been installed by local plumber Kalo and Carson Finnemore of Allstar Plumbing NZ, not only did they plumb up the Water Pavilion but they also installed twelve 6000 litre tanks throughout the three villages so that water catchment could be maximised.

Here on the island of Uluveu, being able to collect maximum rain water means that dehydration; which is a health problem here, will be overcome. A long time before the building of the Uluveu Nuwai Pavilion was started, James Brodie NZ Architect and volunteer for NZCHET, spent many hours with our trustees and designers making sure the design was just right. The actual building has been a huge success and has been perfect for the needs of the community and equipment.

Nat & Samir Allen and Elliot Stead all contributed this year with their time and expertise. Elliot stayed at Uluveu for two months and worked tirelessly assisting me with the project and the running of Ranui. Ranui was home to Martin, Sally,Kay, Elliot and myself for nearly three months and in that time we had many visitors from the community and the occasional party with the young people. Ranui has many facilities that assist the project and we are lucky to have her assistance.

The most exciting day came; once the equipment was installed and we were able to start the desalination system and make water. The thirty solar panels are able to give us so much power that when the water maker is on and the sun is out the batteries are not depleted at all, in fact there is more power going in than coming out! This will ensure the batteries have a long life. Any excess power can be used by the school for other things such as their computers and overhead projectors, also the children will be able to watch educational CD ROMS and off course the occasional DVD! 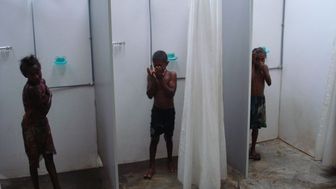 Fresh water shower in action
Many local people from Uluveo and the surrounding islands have come to see the plant in action. This is the first time that showers have been available on the island. It is also the first time that women can come and do their washing without having to cart water from the bore wells which are contaminated. Last night the students from Sangalai School; where the plant is located, were able to take showers. Palm Project has and will continue to donate coconut soap with added tea tree to eliminate scabies and skin infections. It is hoped that the health status of the villages will improve with the increased safe drinking and washing water.
In January 2013 Jason and I will come back to the island. Jason will reprogramme the computer component of the water maker and download the information stored on the SD Card located in the computer component of the machine. Then he will be able to analyse the data stored on the SD Card and this will help to reprogramme the machine. The chiefs and villages would like to have an official opening at this time.
The most common question that was asked of us when we were designing a programme that would overcome the drought problems for this island was,

“with this kind of advanced equipment who will operate it, the Ni-Vanuatu people will not have the knowledge”. To this question I answered “rubbish” actually what I did say was much ruder! but I am not able to repeat this here. Bumseng Tangou, headmaster of Sangalai School Uluveu Island and his wife Leiwia Tangou are now the managers of the water plant and they turn the water maker on every morning and off in the late afternoon, they check they batteries and sometimes if it is a hot day and the sun is out they decide to leave the machine making water all day. They are operating the machinery without any assistance from me and I have handed the reins over to them completely. 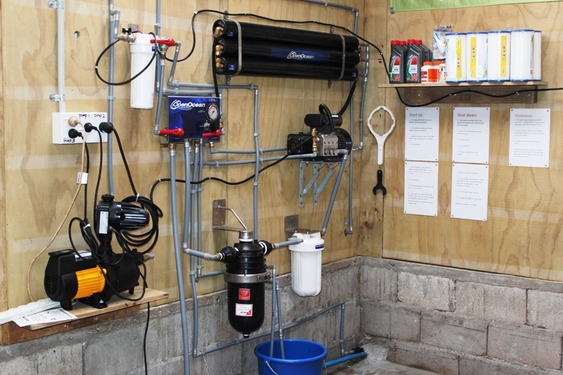